The game developer Aristocrat Leisure Limited has partnered up with the country music start Tim McGraw to create the Tim McGraw Slot. 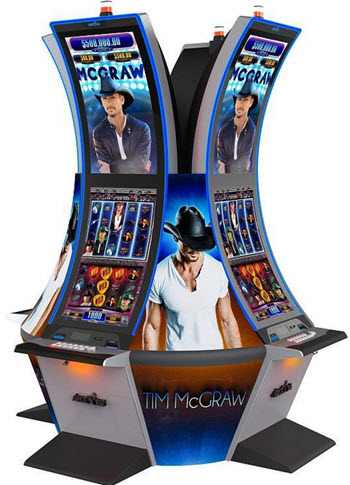 “While country music fans represent a large portion of casino players, this market has been largely underserved, and the new Tim McGraw slot game fills this need,” says a spokesperson for Aristocrat.

Naturally, anyone who plays this slot gets to enjoy Tim McGraw music as background music. Housed in an Arc Double cabinet, the slot is accompanied by life-sized footage of Mr McGraw.

The Tim McGraw slot is available in two modes:

The Growin’ Up Country free spins feature comes with Reel Power and Reel Growth, and a whopping 100,000 ways to win!

The game developer behind this unusual slot machine is Aristocrat, a company founded back in 1953. The company creates slot games, builds casino management systems, and is a trailblazer in the field of social gambling. Aristocrat is licensed in 240 gambling jurisdictions, spanning roughly 90 countries world-wide.